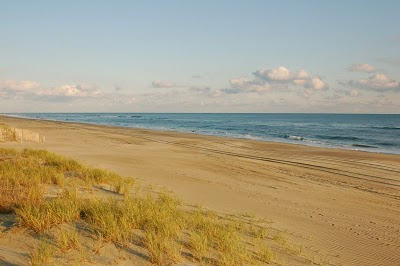 The Thanksgiving holiday has passed, and now we are on the downhill slope to Christmas. This is perhaps the quietest time in beach communities. Since many people living here on the Crystal Coast are transplants, a significant number travel back to their home turf for the holidays. Perhaps they are hoping to see a white Christmas or just want to visit with family and old friends. It is almost as if December brings us a new level of peace and quiet to the coast. For those of us who stay here during the holidays, it is an extremely pleasant time. People seem to be happy to see each other, and there is plenty of time to visit since our area mostly manages to avoid the holiday rush.
We drove down to the Eastern Regional Access on Emerald Isle this afternoon. After a rainy morning, the skies had cleared, and the temperature briefly rose to fifty degrees Fahrenheit. There was no wind, and we had sunshine. That is usually a recipe for checking out the beach.

When we got to the parking lot, we were surprised to see it completely empty. I can only remember one other time in January or February of last year when we found the lot empty. Of course the weather this fall has been much cooler than either of the two falls we have lived here on the coast. Last year on December 2, the high temperature was sixty-eight degrees, and on December 3, it managed to make it to seventy degrees.

Unfortunately we are not going to see that this week. We have a forecast that shows mostly low fifties for high temperatures with only one day getting into the sixties.

The cool weather has made a difference in beach traffic. After we walked over to the boardwalk leading down to the beach, I was not surprised when I only saw a couple of people to the east of us and a few fishermen to the west.

It is the time of the year when you come to smell the ocean and listen to it instead of swimming or wading in it. Being on the beach is still a wonderful tonic for the soul. We stayed for several minutes soaking up the brief afternoon warmth of the sun. Just listening to the waves and smelling the salt spray helped to clear my mind.

By the time we were ready to leave another car had pulled into the parking lot, and the driver had wandered down to the boardwalk. As we passed, I felt like we were handing over temporary ownership of the beach to the new visitor.

We headed back down Emerald Drive and marveled at the gasoline prices being about half of what they were last summer when the roads were filled.

Our last stop before leaving the island was the grocery store at Emerald Plantation. It too was almost deserted. There's always a different feeling to the grocery stores this time of year. In the summer, sometimes the shelves look like they have been ravaged. In December, everything is orderly and the selection is fantastic. You even find locals taking the time to stop and have conversations in the aisles.

As we drove back across the bridge, the sky was beginning to turn golden just as it often does this time of year just after sunset. It was the end of another peaceful day here on the Crystal Coast.

It is nice to be in an area where things seem to slow down during the holidays. I certainly do not miss the hyperactive holiday rush of the cities.

There is plenty of room for visitors here along the blue waters of the Atlantic if you want to try a different kind of holiday this year. It just might become a tradition.
Posted by Ocracokewaves at 1:59 PM