Grabbing Blue Water When You Can Find It 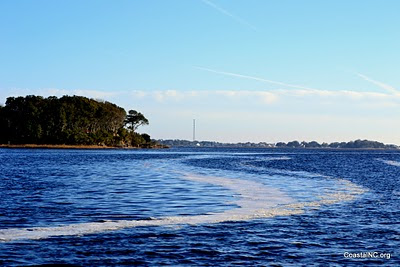 No one living on the Crystal Coast and in fact most of the US is going to deny this has been a tough winter.  We have seen snow here on the coast.  It is not something that is normal here, but after three shorts visits this year, people know what it looks like.

While we have warmed up from those really cold days that made our December and January average temperatures several degrees below normal, we have enjoyed some relatively warm days in February.

But as the cold weather has departed, we have ended up dealing with rain.  Friday and Saturday of the first week of February ended up as a washout.  We got about 2.25 inches of rain during the two days.  We did get warm temperatures along with the rain.

Sunday dawned with blue skies, and I was determined to get out on the water if possible.  We made our normal trip to church and took advantage of the youth group's "Souper Bowl Sunday" meal which gives you a chance to enjoy some homemade soup for a small donation.

Then we had an open house that we wanted to check out in a waterfront community over on Queen's Creek.  So by the time we were done with that it was the middle of the afternoon.  My wife wanted the fireplace turned on once we got in the house, but I resisted the urge to get in my easy chair and take a nap.

I switched to a sweatshirt and then put on my life preserver suspenders and a windproof jacket.  Then I grabbed the gear that makes for a safe boating experience. That includes a spare life preserver, a throw cushion, my emergency gear, radio phone, and our GPS.  Some of the safety gear stays on the boat even in winter, and I always have my cell phone.

It only took a few minutes to load the skiff, untie the bow line, put in the drain plug, and hook up the GPS.  Then I dropped the boat in the water and headed out Raymond's Gut which cuts through Bluewater Cove and leads to the White Oak River.

Near the clubhouse I managed to spook a great blue heron.  I noticed the water temperature had warmed a lot since my last trip in January.  Mostly the temperatures that I saw Sunday, February 6, were in the fifties.  I idled out the gut until I entered the river where I gave it a little more throttle to maintain better control in the stronger current and winds.

As I turned down river at the Red Sixteen Buoy, I moved the throttle forward and trimmed the boat until it got up on plane.  Then I backed off on the throttle just a little and enjoyed my ride across the bright blue waters of the White Oak River.  It was a pretty smooth ride considering the chop.

It was definitely not a warm summer or fall boat ride.  The air temperature this time of year close to the water is pretty close to the water temperature so I basically rode down the river at 50F traveling at 30 MPH going into a 10 MPH breeze.  I pulled my hood tight around my head, and it was not too bad.  In fact my last trip in January, I had only made it to Jones Island.  This time I made it all the way to Swansboro Harbor which is on the other side of the Highway 24 bridges.

I snapped a few pictures to go with the ones I managed on the way down and headed back up river.  The ride back up was warmer since I did not have the added breeze.  I managed to catch our neighborhood king fisher sitting in a tree on the way back to our dock.  I added his pictures to the collection that I have been working on this winter.

Since I was tracking myself with my Android phone you can see the track at one of my Google maps.  I have linked a few pictures to the map track.  Click on the camera icon, and then click on the text link to see the actual picture.

I can hardly wait until the weather gets warmer and spending more time on the water gets a lot more comfortable.
Posted by Ocracokewaves at 8:25 PM

Email ThisBlogThis!Share to TwitterShare to FacebookShare to Pinterest
Labels: boating