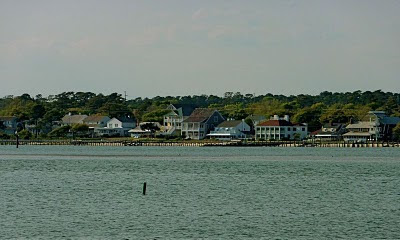 I plead guilty to not writing enough about Morehead City, one of the neatest spots on the Crystal Coast. It is more a result of geography than any intentional slight. I live on the western banks of the White Oak River, so nearby Emerald Isle is naturally the area where I spend the most time. When I do head east towards Morehead City, there is usually a reason. Meetings often end up there, and many of our area services are located there. Even in my beach time schedule there are not enough days when I go to Morehead City just to be visiting the area. Today was an exception. We had one errand, and then we took time for a few minutes of long overdue exploring. We found a neat CAMA public access point on Evans Street just before the Atlantic Beach Bridge. The photograph in the post is a shot of the general area taken from Atlantic Beach.
Morehead City is Carteret County's commercial heart, but it is far more than just our favorite place to shop. It is a wonderful place to live and has some of the most beautiful homes in the area along with great water access. Sometimes I wonder if there are more boats than people in Morehead City.

The interesting area that we found on Evans Street was the site of the old wooden bridge from Morehead City to Atlantic Beach. Sometime after the bridge was moved to its present location, the old location became a CAMA water access point. It is a peaceful spot to gaze across Bogue Sound to Atlantic Beach. The area also has some wonderful homes.

It would be hard to find an area with better water access than Morehead City. My wife recently got directions to an appointment. The instructions included, "You will pass two marinas." A quick glance at a map of the area confirms that it is normal to suspect that water is everywhere when you are in Morehead City. The city is actually on a peninsula. The water that surrounds the city on three sides is the life blood of Morehead City. From the annual NC Seafood Festival in the fall to the Big Rock Blue Marlin tournament, Morehead is all about the water.

Obviously the NC Port plays a large part in the city's life, but it is important to remember that the bridge in Morehead City is a gateway to the beaches which run from Fort Macon all the way to the Point at Emerald Isle. To a certain extent Morehead City influences our life on the Crystal Coast more than any other single place. Without the services in Morehead, we would be living in a very rural area.

Part of the reason that I enjoy living where I do on the western side of the county is that I can be at the shopping area of Morehead City in eighteen minutes. I get the advantage of good shopping without the inconvenience of traffic and having stores on my doorstep.

Of course Morehead City relies on Atlantic Beach to provide most of its beach atmosphere. Beaches are not the area's only attraction. While I have enjoyed the History Place in Morehead, I also love going to Fort Macon State Park. We dropped by today to see the new interpretative center that opened last fall. It is a wonderful building. We got there too late to visit the fort itself, but we have enjoyed it many times before. I did take a few pictures of our trip. There are some of the new Fort Macon center mixed in with the ones of Atlantic Beach and Morehead City.

We finished our trip with a peaceful ride down the beach to Emerald Isle. I caught a great sunset from the Cameron Langston Bridge over Bogue Sound. It was a great ending to the day. Since today was warmer than yesterday, it was easy to stay positive about the cool spring weather .
Posted by Ocracokewaves at 7:37 PM