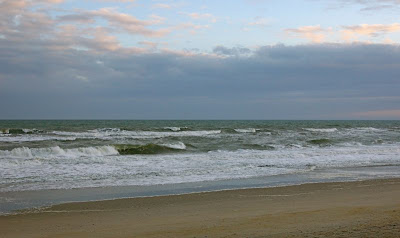 That is the thing about spring. Just when you think things are headed in the right direction, along comes a cold front, and you are back to wearing blue jeans and sweat shirts to preserve the illusion of warmth. From what I have heard, this weekend was absolutely great. Someone told me that it was even nice enough to be out boating for a few hours on Saturday and Sunday. I am a self-confessed weather junkie so it was no surprise to me that this morning when I managed to find some rain about half way out to the mailbox on my trip to retrieve the morning paper. Later in the morning, the rains became heavy enough to send our cat scurrying back inside after he ventured on the deck while I was taking a picture of the downpour. Fortunately the rain did not last long so we did not get the soaking that some mountain areas received. Still it was a rude reminder that it might be a bumpy ride to summer.
When I finally caught up with things today and ran out our for a few errands, I got a little over optimistic and ended up wearing shorts and a tee shirt. It only took me a couple of stops to figure out that I had made a strategic error. Had I known that the North Carolina mountains would be receiving snow showers along with their rain today, I would picked some different clothing.

Still I did not end up frozen, and likely if I had worn shorts a few weeks ago, there would have been a different result. There is no doubt that everyone is ready for spring. One of my errands was searching for tomato plants. I had managed to purchase some nice ones in Roanoke, Va over the weekend, but I left them in our Virginia garage. Now most people would just wait and retrieve the other plants, but I am the defending tomato king among my circle of tomato growing friends, so a day lost now might cost me my crown.

I also had to get a few bales of pine straw for the temporary windbreak that I create for my plants until the spring winds die down a little. Hopefully I will get the plants in the ground tomorrow. We have some nice weather coming so I am hoping for a strong start on my quest for a third straight crown. Tomatoes are huge part of our diet in summer, so having them ripen around the first week of June is also a welcome sign that summer has unofficially arrived.

Late this afternoon, the clouds started dissipating, and I became a little more hopeful that I might find some blue sky and capture a few photos. I changed into some warmer clothes and headed over to Emerald Isle around half past six. I decided to head to the Eastern Regional Access so I could check out the progress on the new bike path. I am pleased to report that much of the new trail is just waiting for pavement. A short stretch at the far end is still under construction, but I think the trail will be done soon.

As soon I got parked at the beach access and opened the door to my truck, I knew that March had tricked me once again. Even with blue jeans and sweat shirt, it was a cool walk to the beach. By the time I had snapped a few photos of the waves and empty beach, my hands felt frozen. I had to turn the heat on in my truck as I cruised back to Emerald Isle. I just missed a spectacular sunset over Bogue Sound by about five minutes, but there is always tomorrow, and it is supposed to be clear and warmer.

March and a good part of April are always tricky. Sometimes it looks cold and windy, but by the time you get to your destination, your trip turns out to be a great idea. Other times, you gamble with the weather and end up being glad to be back in home port.

With Bradford pear trees already blooming along with the daffodils, it will not be long before the azaleas are in bloom. Then in just a few weeks, we will be complaining about the heat. As it has often been said, if you do not like the weather just wait a few hours, and it will change.
Posted by Ocracokewaves at 5:22 PM