A Memorable Afternoon on the Water 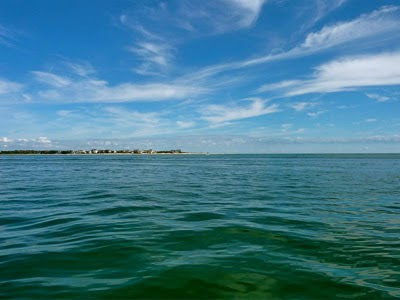 We made the move to the coast a little over three years ago. Our move was one of choice. I wanted to get back to a place where we could see the water like we could in our first home on the shore of the Bay of Fundy In Nova Scotia when we lived there in the seventies. The sea and its powerful moods had brought a new view of life to us in those days. I still have wonderful memories from those days, and I wanted to be in another truly scenic place where it would be possible once again to be under the influence of the ocean. Unlike long ago, I wanted a place where the water was warm and inviting, and where I could safely boat and create a whole new set of memories. I wanted to spend time on the water that would give me dreams of fish of all types and water in colors that can barely be captured. The Crystal Coast ended up being the spot, and this past Thursday, October 22, ended up being one of those days which I will get to enjoy over and over.
Thursday's morning sky was full of puffy white clouds. The temperature was cool, but there was no wind. This was to be my first chance this fall to hit the water when by all reports the fishing was really good. People were reporting decent catches from the fleet of boats going after the fall spots, Other boats were reporting good catches of puppy drum, trout, and blue fish. The surf and pier fishermen were also doing well.

I had one meeting at our church to do some training for the church secretary who was kindly taking over maintenance of the church website. After that I made a stop at Dudley's Marina to replenish my gear, picked up some shrimp for bait, and stopped by the ice machine on the way home. At 12:30 PM my fishing partner called to say he was home from work and would be over in a few minutes. Just before 1 PM we pulled away from the dock and headed out towards the White Oak River.

Surprisingly the river was still glassy smooth at 1 PM. Usually by that time of day we have a little breeze. We went slowly by two boats fishing not far from what we consider our private White Oak hole, and then I brought the boat up on plane for the trip to Swansboro.

Even when you live on the river, there are a limited number of days when the water is so smooth that the boat literally glides across it. Thursday afternoon was just such a day. The trip to Swansboro was so smooth that I was able to take a series of slides from my center console mounted camera. That the pictures are so clear gives you a very good idea of just how smooth the river was on Thursday. It was pretty close to amazing. I have had rides like it before, but they are usually around sunrise. The other nice thing about the trip on Thursday was that it was warm with the temperatures in the mid-seventies. We were dressed just as we were when we fished in the summer.

Getting to the Swansboro bridges from Bluewater Cove takes about ten minutes. I usually throttle back and go through Swansboro harbor relatively slowly. This time of year, you almost have no choice since you have to thread your way through the flotilla of spot fishing boats.

It was not long before we turned up the Intracoastal and cruised through what I like to think of as Cedar Point's main street. You briefly slow in the no-wake zone at the Wildlife Resources Ramp, but it is only a few minutes before you are turning and heading out Bogue Inlet. We passed a string of boats anchored along the eastern edge of the marshes that line the Inlet. That is also a favorite spot for fishing.

Soon we were making the last turn to the east where the Point at Emerald Isle is straight off your bow. After that you turn and head pretty much straight out into the ocean. It was this area about one half mile to one mile off the beaches that we wanted to fish. We first chose to fish on the west side of the channel and had very little luck so we moved farther out and fished on the east side of the channel.

From our position we had a good look at the Corps of Engineers' dredge that was working about another mile out. We had started bottom fishing with double hooked rigs. I had shrimp on one hook and artificial blood worm on the other hook. We were in about seven feet of water just off a hole that I had seen on the deepfinder, but we were getting no bites. Just then my partner, Dean, spotted some bluefish feeding on the surface. I grabbed the rod that I keep rigged with a Gotcha plug and put the plug in position to come back through the feeding zone. I immediately hooked a very nice bluefish. It was large enough that we needed to net it to get it inside the boat. As soon as Dean got rigged with a plug and cast into the feeding zone, he also hooked a bluefish. We landed eight nice bluefish in about fifteen minutes. Including a double where I had the distinct pleasure of unhooking two bluefish from one Gotcha plug. We decided that was enough fish to take home. We started throwing back everything that we caught.

We managed to hook and bring to the boat about thirty bluefish from that hole. We then moved on and tried to fish a wave zone for some red drum, but the water was so clear we decided the fish could see us and were staying away.

Then we made the fateful decision to fish on the west side of the Inlet just off Hammocks Beach. I had rigged up my trout rod with a new lure in case I saw any more feeding fish. We were back bottom fishing when once again we saw some blues feeding. I put my new lure right in the middle of them and three fish dived on the lure. I hooked one of them and brought it to the boat. I did exactly the same thing on twenty straight casts. The lure was a bluefish magnet. By this time I had caught all the bluefish I wanted. My partner had been catching them also, but not on every cast. So I passed over my magic lure and sure enough, Dean started catching a fish every cast. We had a grand old time. I had bluefish dancing on the surface. Then there were bluefish diving as hard as they could, and most of the time my trout rod was bent almost double.

Finally it slowed to a fish on every third cast. We lost count of the fish at around seventy. It was one of those days that fishermen live for and never forget. We had been in one of the most beautiful spots on the east coast, and we had caught fish until we were tired of catching fish. The potential of having a day like that is one of the reasons I moved to the Crystal Coast. The fact that we could have that experience less than twenty minutes from my home dock is just amazing.

After getting back to the dock, I filleted the bluefish, skinned them, and cut away the dark meat so Dean and his wife would have some unforgettable fresh fish. According to all reports they loved the fried bluefish.

I was ready to go again today in search of red drum with another friend, and just as we were getting ready to put our gear on the skiff, a storm came in from the ocean. It appeared to follow the channel through Bogue Inlet and then come right up the White Oak. I was not heart broken at missing fishing today, I still had plenty of memories to savor from yesterday. Some memories will carry you for a long time. I am certain that yesterday's memories have some long legs..

I put up a couple of slide shows. One set of pictures takes you down the White Oak up the Intracoastal and out Bogue Inlet to ocean and back to Swansboro. The other show is from Swansboro back up the White Oak to Bluewater Cove. If you click on a picture you will get a larger version.
Posted by Ocracokewaves at 5:00 AM