Still Room at the Table 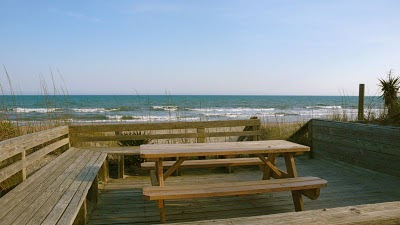 One of the things that attracted us to Carteret County was the relative lack of crowds. During most of the year, Carteret County has about 114 people per square mile. That compares to 2,636 people per square mile in Fairfax County, Virginia is where I spent most of my corporate working years. It a huge difference. Actually the difference is even bigger than that since the people per square is calculated using just the county's land area. If you added in the county's over 821 square miles of water, our population density drops to 44 people per square mile. While we have very few people living on the water all the time, we have lots of people who spend a considerable amount of time on the water. If space, freedom from crowds, and the ability to lose yourself on the water or a beach are important to you, the Crystal Coast has space for you, but there is more than that to it.
There is actually a seat at the table for you in Carteret County. By that I mean that we are small enough communities that you can be more than a face in the crowd. You can be someone who is recognized at the grocery store or whom the waitresses remember.

There are not a lot of layers of government here. Carteret County also functions mostly through small businesses. Lots of times, the person behind the counter or planting your palm tree might be the owner, son of the owner, or someone who has worked in the same business for years.

On the flip side of this, most people here in the county give others a fair amount of space. If you want to be left alone, that will not be a problem. If you want to find a spot to hide, there are plenty of cul de sacs where your closest neighbors will be herons and pine trees.

While people are extremely friendly when they stop to talk and drop into your world, they just as quickly can move out of your world and walk on down the beach.

We end up exchanging a fair amount of pleasantries along the beach, but I have never felt like I intruded upon or bothered another person. There is something about being beside the ocean that lets you be momentary friends as waves crash on the beach. Yet just as a wave expends itself and heads back out to sea so also do our temporary friends have a few words and then disappear down the beach.

It is definitely not like being on city street. Making eye contact and saying something just does not seem threatening on the beach.

Right now we are in an in between period. Our visitors this time of year mostly come down on the weekends sometimes adding a day or two to make a long weekend. There is more traffic over on the island on the weekends, but there certainly are no crowds.

As we get closer to June, we will start seeing more vacationers. Eventually the grocery stores will be pretty crowded from Fridays through Sundays. We will end up dodging some of our favorite restaurants during their busiest times.

It is a rhythm that is pretty easy to take. In the summer months we end up doing most of our boating during the weekdays. We often hit the beaches in the afternoons just as the serious beach lovers are departing. Going out to dinner on a Friday or a Saturday night at the busiest times will likely wait for a few weeks until the peak of the tourist season passes by in mid-August.

Then as Labor Day rolls around, we will pick some late season visitors with younger children. After that surge, aside for the fishermen, we are back to having all of the space to ourselves.

We are glad to have summer visitors because they keep our businesses running. Still it is nice to have plenty of elbow room back each fall. It is great to have crowds who leave before they become permanent.

The tourist season helps Carteret County continue to be a very attractive place for those of us who enjoy a night sky without a lot of additional light beyond the stars.

We get the benefits of a summer influx of people without having to take care of them all year. It ends up helping us have services and businesses that might not be justified by our year around population. It works out well for tourists and locals.
Posted by Ocracokewaves at 7:56 AM